INTER SER celebrates 20 years of success and offers a dedicated Welfare program to the entire staff to thank them.

On 26 and 27 May the Hotel Relais Rocca Civalieri near Alessandria in northern Italy hosted the celebrations for the 20th anniversary of Inter Ser.

A two-day “special” event that the company, headquartered in Vercelli with its logistic center in Sassuolo, wanted to dedicate entirely to its employees, to thank them for their contribution in twenty years, characterized by a constant growth in terms of turnover and expansion on international markets. 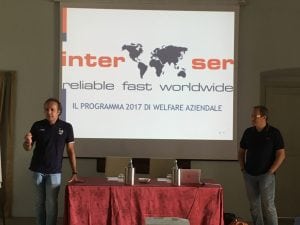 In addition to the entertainment activities and the gala dinner, the entire staff took part in a Mindfulness course which, focusing on the well-being of the individual, helps to combine efficiency and productivity. “We believe that ensuring that every employee is available to express his full potential every day while entirely respecting his needs and personal aptitudes, whatever the role played within the organization, is one of the winning  keys to the company success,” said Gian Luca Zanoni.

The brothers Gian Luca and Paolo Zanoni and their father Piero have also announced the launch of an innovative corporate welfare program for their employees, curated by Eudaimon, a leading company in the sector already operating with import  groups including Allianz, Benetton, Credem, Edison, Ferrero, Ikea, Michelin, SKF and Zara.

Testing and production: a question of balance

How can costs and quality be predicted for an excellent finished product?

Read the story of our client in Kazakhstan