INTER SER confirms its professionalism and wins the award for best spare parts supplier in Brazil.

Just five years after entering the Brazilian market, Inter Ser has notched up a major achievement by winning the award for best spare parts supplier in Brazil in 2016. 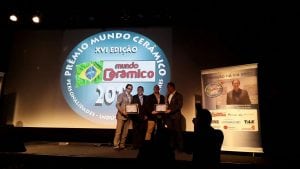 The award, assigned by the local magazine Mundo Ceramico on the basis of a survey among Brazilian ceramic companies, was won by Inter Ser despite the presence of another 16 longstanding competitors. The award was claimed on 21 November in São Paulo by Massimo Barale and Julio Vicario, respectively the company’s area manager and agent for Brazil.

“This recognition confirms our professionalism and competence on the Brazilian market,” commented Gian Luca Zanoni, CEO of the Vercelli-based company, highlighting the importance of the commitment tailored on customers’ specific needs. 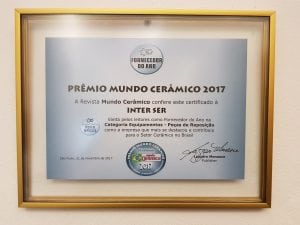 Ever since it was set up in 1996, the strong focus on the customer has been one of the company’s keys to success. Today Inter Ser distributes original spare parts and ceramic machinery in 62 countries worldwide and is a key partner for more than 150 customers, including 22 of the world’s 25 largest ceramic tile manufacturers.

Plants for large sizes and slabs

To invest in cutting-edge technologies to be competitive on the market.